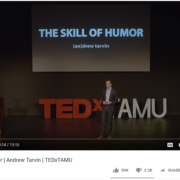 Why Humor is an Idea Worth Spreading