As an entrepreneur, one of the hardest things to figure out is “What should I work on?” This is also true while working for someone else, but for those of us on our own, it can seem even more daunting.

Here’s a quick strategy I use when trying to figure out what to work on; I call it the Prioritization Matrix.

You should already have a task-list of things you want to / could do floating around in Evernote, Trello, or any of the thousands of To-Do list apps. That’s great, but for this exercise, start a new list. 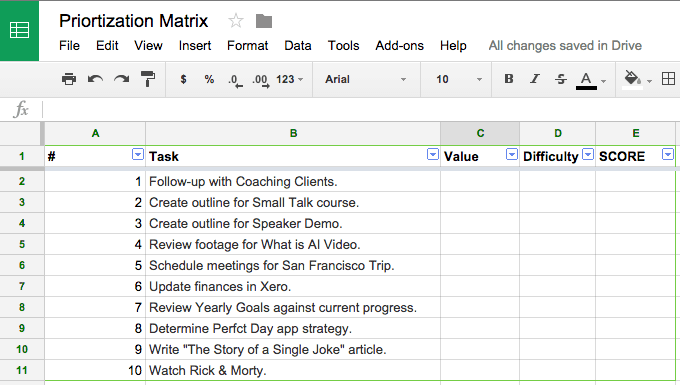 Wow, that’s a lot that I could be doing. All of which (save #10), could contribute to my business in some way. It’s at this point you might start to feel overwhelmed, but worry-not, just move to step 2.

Step 2: Assign value to each task.

Now, with the list in front of you, assign value from 1-10 (10 being the highest) to each of the tasks you’ve come up with.

You have to determine what drives value for you; is it exposure, credibility, money? Hint: as an entrepreneur, money is a good one. 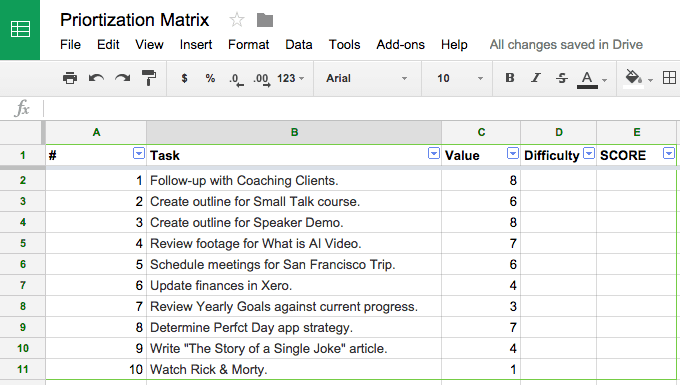 As you can see, this isn’t a ranking of the list, so it’s OK if two or more entries have the same value ranking. Now if they all have the same value, you have to be more honest with yourself as to which are truly the most valuable.

Step 3: Assign difficulty to each task.

The next step is to think about how hard each task is going to be to complete and assign it a number from 1-10 (10 being the hardest).

Note that the difficulty assignment should be based on your ability (and motivation) to do it. It doesn’t matter if entering numbers in a spreadsheet is technically easy, if you despise it and find it a challenge for you to complete, then give it a hard ranking. 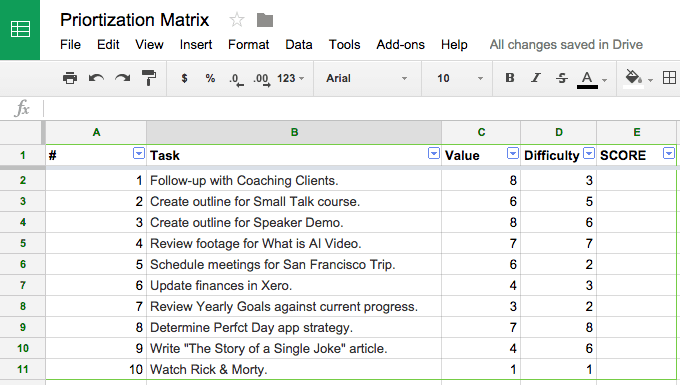 Once you have both a Value and Difficulty score for each task, calculate their priority score by dividing the Value by the Difficulty. 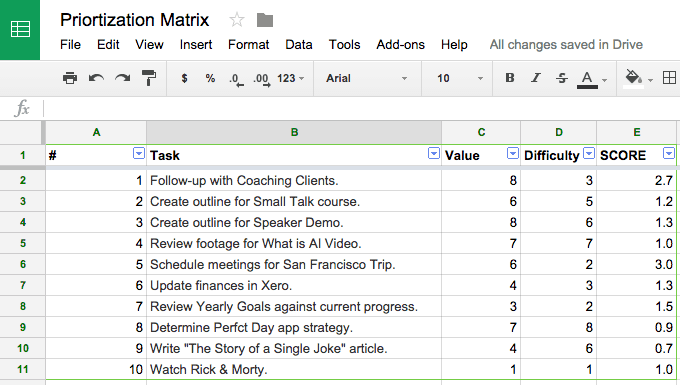 Step 5: Re-order the tasks according to score.

The final step is to re-order your list of 10 things to do by Priority Score, with the largest value going up top. Congratulations, that’s the task you should be working on. 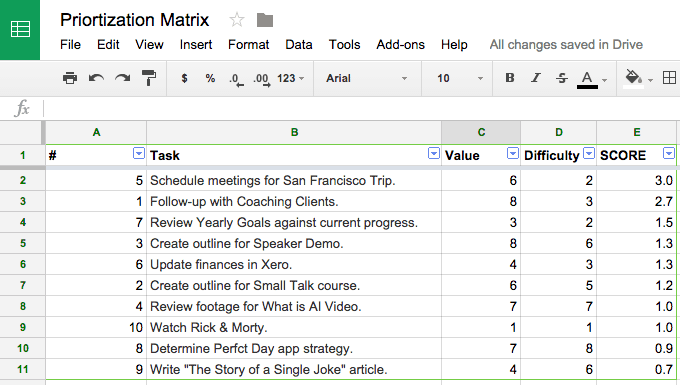 A Few Notes About the Process

The whole point of the Prioritization Matrix is to make the process of prioritizing tasks a lot easier. That being said, there are a few things to consider:

I hope that helps you with the prioritization process. You can find an example copy of the spreadsheet I used here: Prioritization Matrix Example. Share any feedback or questions in the comments.