Today’s the day. After being a nomad for 550 days, I’m hanging up my traveling shoes and settling back in NYC (Brooklyn to be exact).

From March 1, 2015 to September 1, 2016, I lived out of two bags, traveling the world for work, fun, and selfies. After 18 months, I decided to return to the homeful lifestyle (though I’ll still be traveling quite a bit, including a 3-week stretch that starts in 3 weeks).

To honor the closing of one chapter in my life, I decided to take a quantitative look back at the experience (much like I did when I surpassed 1,000 performances).

Note: This is only the miles it took to get from one place to another; I didn’t track distance traveled within a destination (such as all the walking I did in Texas when PokemonGo came out).

159,000 miles is the equivalent of roughly 6 trips around the globe (given the Earth’s circumference is measured at 24,874 miles), or one circumnavigation every 3 months. 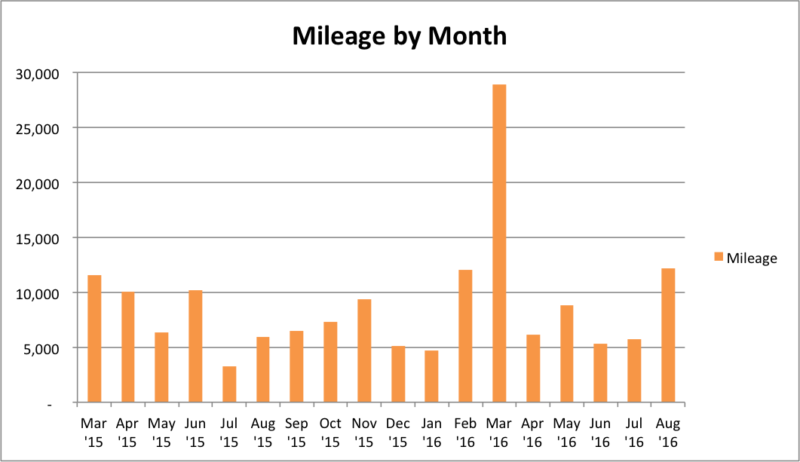 Bar Graph of Mileage by Month

Not all time periods were equal when it came to traveling.

I definitely traveled the most at the beginning of the year, nearly 50% more than the other quarters. The summer was (barely) my lightest travel time, mostly due to a slowdown in work engagements. 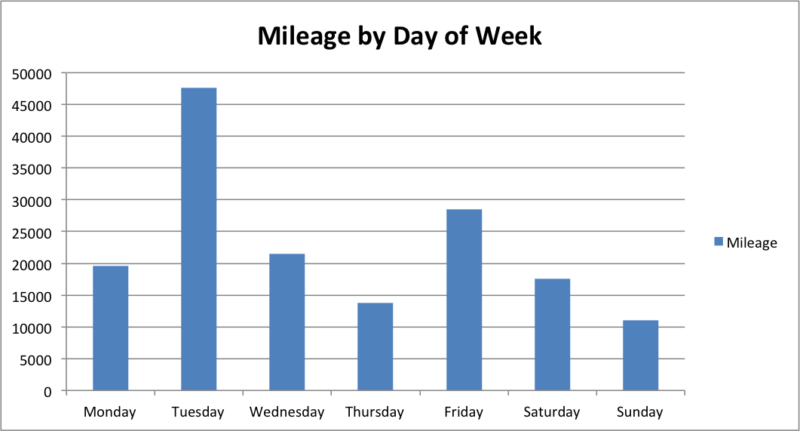 Bar Graph of Mileage by Day of Week

Tuesday was by far my busiest travel day at 47,609 miles or 30% of all travel coming on that day. That likely has to do with the fact that flights tend to be cheapest on Tuesdays and Wednesdays.

Naturally there were ebbs and flows to my travel.

Line Graph of Mileage by Date

The most I ever traveled in one day was 9,130 miles, which included a flight from Singapore to Los Angeles and then on to San Francisco.

I did some form of significant travel on 247 out of the 550 days (45%). On the 303 days I didn’t travel, I often did local trips to restaurants, parks, and theaters, I just didn’t move from one location to another.

All told, I had 609 “visits,” where a visit means I did something in that place, whether it be leading an event, going to a local attraction, or sleeping there (hey, sleeping is something). So if I was driving through and stopped to do a show and then moved on, that was 1 visit. If I stayed in a city for 5 days, that was 5 visits. 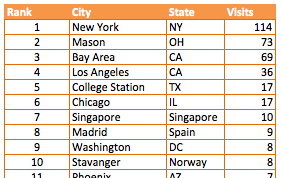 Despite having left NYC, I still found myself back here quite a bit, thanks in large part to working with companies based here and it being a great launching point for European travels.

The #2 and #3 most popular spots weren’t that surprising, considering my mom lives in Ohio and it gave me a spot to crash when I wasn’t headed somewhere specific, and the Bay Area was where my GATT was and was a potential destination when I decided to stop the nomadism. 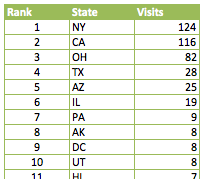 The top three states weren’t surprising, considering what I just mentioned about the top cities.

#4 wasn’t a surprise either; my brother lives in Texas and I visited a few times to guest teach his classes, as well as had a couple of events elsewhere in the state. Arizona at #5 seemed high, but it was popular due to conferences and wanting to see the Grand Canyon (which I did twice on these travels). 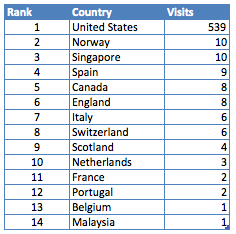 Table of Countries by Visits

USA! USA! USA! accounted for 89% of my visits. Second was Norway and Singapore where for both I spent 10 days doing events and sightseeing. I was only in Belgium and Malaysia for one night each, still managing to do an event in both.

Planes, Trains, and Automobiles isn’t just a 1987 comedy, it was also how I got around during my nomadic journey (plus buses and a ferry). 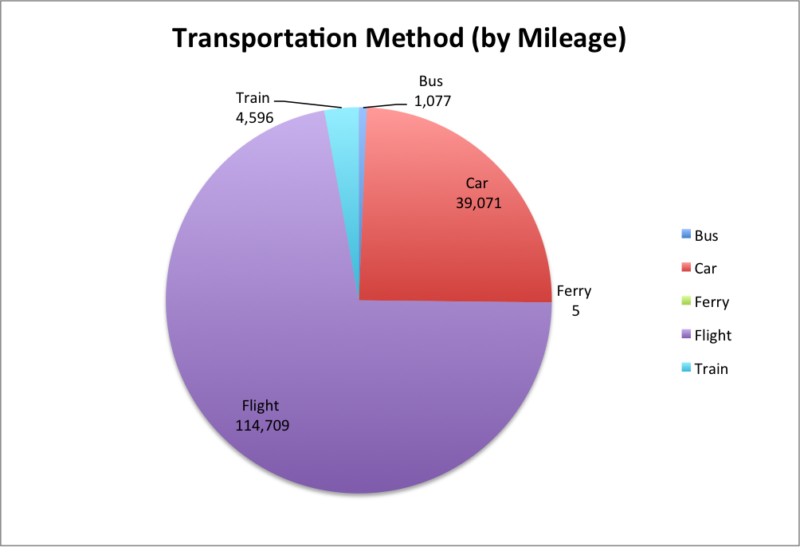 I had the pleasure of seeing and hanging out with hundreds (maybe thousands?) of people throughout my trips. Being nomadic gave me an opportunity to visit friends all over the world, attend a variety of conferences and festivals, and of course meet tons of interesting people along the way.

That said, a majority of my time going from once place to another (e.g. flights) was done alone. 88% of the miles traveled (140,807) were done by myself. As an introvert, I didn’t mind this at all.

While most of my travel was done on my own, most of my visiting was not. I certainly could not have pulled off this adventure without the help and support of some incredible people.

I mean that on an emotional level, but that’s hard to quantify, so here’s the support some provided on a “you can sleep here” level.

Pie Chart of Accommodations by Nights

There were a mix of different types of accommodations, including staying with friends, family, friends of friends (FoF), AirBNB, while in transit, and at my apartment.

Which I guess now is a good time to confess something: though I’m ending my nomadic journey today, I’ve technically had an apartment for about a month. BUT I barely spent time there this last month, which was also my second busiest travel month of the entire experience. Plus 18 months sounds a lot better than 17…

That said, here are a few notes about where I stayed:

Like I said, I couldn’t have done this alone.

A Few Final Pieces of Data

As of this line, we’re sitting at over 1,400 words for this post, so I’m going to wrap it up. Here are a few random pieces of data that I couldn’t fit anywhere else:

The Best Teacher I’ve Ever Had

My First Day as a Corporate Nomad
0 replies

Nomad Map of Everywhere I Went