Do you think you can be anything you want to be, as long as you set your mind to it? I didn’t used to think so. I mean, people are limited by education, environment, and circumstance.

And then I saw something, or rather someone, who changed my mind.

I was sitting at the closing event of the Women’s Foodservice Forum in Dallas, TX. Earlier that day I had delivered two breakout sessions to 400 aspiring women leaders on the topic of humor in the workplace and was now celebrating the end of the incredible conference.

To my left was a VP of Coca-Cola. She was telling us the story of those “Japanese coke machines” that allow you to pick any flavor you want that in no way started in Japan. To my right, was a VP of Starbucks. She had recently helped improve the food selection that sits in those glass cases along with the delicious marble loaf.

In the middle was a very distracted me. Despite our interesting conversation and the fact that these were two very powerful women to know with regards to business, I couldn’t help but focus on what was happening directly across from our table:

A man stood drawing on a white easel. One woman posed off to the left. A line of ten women stood off to the right, awaiting their turn. The man was not a caricaturist, nor was he a painter, but he was an artist, specifically of drawing women’s backsides.

For each volunteer, the Bob Ross of Butts would give a warm greeting, turn them around, and then help them pose in a fashion to accentuate the lines of their tookus. He would then sketch their butt, sign his name, and and give the drawing to his butt subject. The process took one to two minutes and then the next volunteer would step up.

I was fascinated. A butt sketch artist. I had never heard of such a thing. Immediately I wondered: how did this all come to be?

I’ve dwelled on this a lot since then and have come up with three theories:

My first thought was that he was a failed caricature artist. I imagined he went through art school and was decently talented but he could never draw faces. Like he’d get the frame right but then butcher the nose or draw the eyes lopsided. Eventually he said screw it and drew what he was good at: curves.

My second theory was that he was actually incredible at drawing faces, so good, that he would include the blemishes and flaws of his clients to the point of insulting them with his accuracy. The only way he could get around making his clients happy while not offending his integrity as an artist was to turn them around.

My third, and what I considered the most likely theory, was that he had recently attended a motivational seminar. In it, the speaker asked, “What are you most passionate about? Find a way to make money doing it.” The guy thought to himself, “I like looking at butts. How can I profit from that?”

Like most businesses, I’m sure he started with a few ideas that wouldn’t work. Create Yelp for butts? Too offensive. Become a casting director for Victoria Secret? Too hard to get into. Do caricatures but instead of drawing faces, draw butts? Perfect.

A Boat, A Bridge, and Boom

My TEDx Talk on Humor at Work 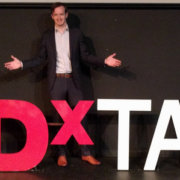 The Process of Giving a TEDx Talk

18 Months as a Nomad – By the Numbers
0 replies

The Story of My Year as a Nomad
Scroll to top