From everything that I’ve read, been taught, learned and experienced when it comes to improv, they are concepts and ideas that come back time and time again.  And if you were to take those concepts, put them in a pot, and stir, you’d have an “ideal improviser” soup.

The ideal improviser doesn’t think about these things, he just does them.  (Of course until you reach that stage, you’ll probably have to think about them from time to time, even if it means getting in your head.  That’s what rehearsals are for).

Doesn’t Think – The motto of the Upright Citizen’s Brigade Theater is “Don’t Think.”  It’s true, the ideal improviser doesn’t think about The Rules, or even this list of things; he listens, builds on what’s been established, and plays.

Listens – No man is an island and no improviser can survive without his scene partners.  Listening is the key to building a completely improvised world.  After all, as Truth in Comedy tells us, “The only star in improv is the ensemble itself.”

Ignores the Rules – The entire premise of Mick Napier’s book Improvise is that you don’t need to even know the rules to have a great improv scene.  Asking questions, or saying no can work as long as you have commitment and agreement from your scene partners.  As Charna Halpern says in Truth in Comedy, “The only rule that can never be broken is the rule of agreement.”

Is Specific – Specificity is what adds spice to an improv scene and helps bridge the gap between what is real and what the audience sees as “real.”  As Tim Kazurinsky said, “The trick is to pretend that none of it is pretend.”  This comes in the form of being specific–in dialogue, references, character choices, object work, and stage picture.

Changes Things Up – Too much of the same can get boring, even if it started out great.  No one wants to do (or see) anything that is the same for 50 straight minutes, even laughing–they need a break.  The ideal improviser shows variety in character, emotion, status–everything.

Has Fun – Mick Napier is quoted in The Second City Almanac of Improvisation as saying “At the heart of improvisation is play.”  That’s why the ideal improviser gets onstage: to have fun.

The ideal improviser is just that, an ideal.  He doesn’t actually exist.  But following the guidelines above, distilled from the rules, non-rules, and generalities of various methodologies, you can get closer to that ideal improvisers.  And just like the chicken dance, my friends, that’s what it’s all about. 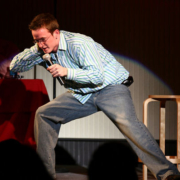 The Story of My Year as a Nomad