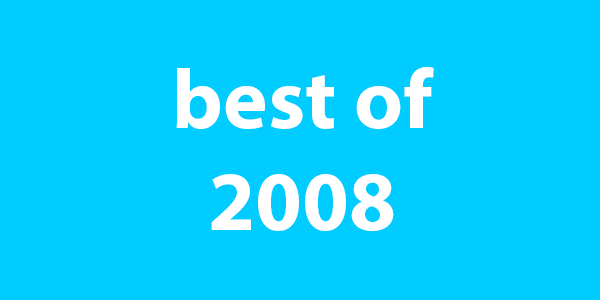 Best Weekly Project – $100 Budget
By far the hardest and most impactful project of the year was living on a $100 Budget.  The revelations I had and experience was enough to change how I’ve behaved since then, and also reminded me of why I work as hard as I do, so that I don’t have to find myself in that situation every week.

Best Joke – Music Teacher
With 366 jokes, there are bound to be some good ones and some bad ones. Music Teacher was my favorite:

A leader of an orchestra was recently electrocuted, proving after all, he was a good conductor.

You can check out the best, worst, and everything in between in the Joke a Day.

Best Decision – Go with Rajiv to PanDesi
Many of the best decisions that affected me in 2008 were actually made in 2007: move to NYC, do a weekly project, have Thanksgiving in NYC. So my best decision that actually occurred in 2008 was to go with the Funny Indian to a taping of his show “Desi States of America.” Not only was seeing the behind-the-scenes process fun, but it led to a discussion with the CEO of the network, a submission of writing samples from me, and ultimately my writing gig for the show. Since then, I’ve written 19 sketches and 9 monologues.

Best Personal Development – Saying No
Perhaps my biggest development personally was learning the ability to say no, mostly to myself. Which is weird since my overarching philosophy learned from improv is “yes and.” But whereas “yes and” is my general attitude, saying no has helped me focus. There are so many things I want to do, but I have to be choiceful; I can’t do all of them. Time is our most precious resource, so it’s best to make the best of it by focusing on the most important things, not everything that may sound interesting.

Best Sketch – Don’t Vote
Throughout the year, I wrote a decent number of sketches, both personal and for PanDesi. My favorite sketch that I wrote in 2008 that was actually produced was “Don’t Vote” for the Desi States of America.

Best Travel – Trip to LA & Cruise to Mexico
Back in May, my mom, brother and I went to Los Angeles to visit the city and to take a cruise to Catalina . It was a great trip because it was my first time to LA, I got a chance to do the touristy stuff like see the Walk of Fame, take a tour of houses, and hit up Universal Studios, and I got a chance to see the “real LA” (thanks Rajiv). And that was all in just the first 2 days of the trip. Then we hopped on a cruise to Mexico where we were privy to an authentic Mexican meal and tour by one of David’s former host parents.

Best NYC Visit – The 8th Floor
Sorry for everyone else that came, I definitely enjoyed your stay, but nothing beats having 10 8th Floor members in the apartment and seeing over 20 hours of improv over the course of a weekend.

Best Improv Show – 2 Square
The shows I saw during the Del Close Marathon were amazing; 2 Square was better. A two person group from Chicago, Peter Grosz and John Lutz seamlessly built mutli-character scenes and hilarious dialogue.  If I one day became half as good as them, I’d be happy.

Best Life Hack – Drying off your razor after shaving
Lifehacker.com is definitely one of my favorite websites and one of the only ones I consistently follow. Of all the tips I’ve found there, and some of my own, the best life hack was a simple change to my shaving regimen. By drying off my razor with a towel after shaving, I’ve been able to use the same razor for the entire year. Apparently it’s not the blades getting dull that makes razors unusable, but them getting rusty, thus the drying to extend their use.

Best Open Mic Stand-up Bit – College Degree
I’ve had the pleasure of watching some great comedians at the open mics I’ve attended, and some of them have told some amazing jokes. I think my favorite has to be from Nore Davis: “My mom told me, go to college, get a degree and you can get you a job making $60,000 a year. I got my degree, I do stand-up, and I owe the college $60,000. People ask, ‘what was your degree?’ Bankruptcy, that was my major.”

Best Movie I Saw – Forgetting Sarah Marshall
I didn’t really see all that many movies this year, but I did see some great ones such as The Dark Knight, Iron Man, and Tropic Thunder. Forgetting Sarah Marshall wins though because it was hilarious, a well-done comedy with perfectly absurd moments, and made me think: “I hope to one day write something that funny.”  An honorable mention goes to Dr. Horrible’s Sing A Long Blog. It’s not really a feature length movie, but it is incredible.

Best TV Show I Watched – The Daily Show
I also didn’t watch TV in 2008, but there was one show I made it a point to watch when I could – The Daily Show. Maybe it was because of the election, or their knack for pointing out the ridiculous, but The Daily Show was my source of entertainment on the small screen (well technically computer screen since I watched it on hulu.com). And shout out to Matt for getting me tickets to see the show live!

Best Book I Read – Improv Wisdom
I read quite a few good books this year, but the book I enjoyed most was Improv Wisdom: Don’t Prepare, Just Show Up

.  It covers some of the basic ways improv can be applied to business and life situations, and is very much along the lines of what I want to do with Humor That Works. 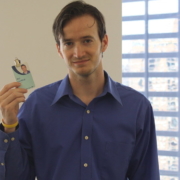