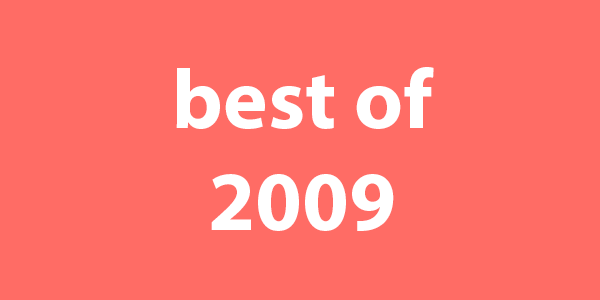 Best Monthly Focus – Improvise
My favorite monthly focus was back in July when I did something improv related every day of the month. It led to over 90 hours of improv, 23 shows seen, and 7 performances.  It was a blast.

Best Weekly Project – Solve a Rubik’s Cube
Ok, so maybe I’m a geek, but one of my favorite things from this year was learning to solve a Rubik’s Cube.  Why? Because it provides a mental challenge (and something I can do on conference calls at work), fills a childhood dream, and attracts the ladies… one of those might not be true.

Best Decision – Shoot from the Hip
It was a close call for the best decision of 2009; there was the AIN conference, the goal to improve my tastes, and of course having Chick Fil A for 3 times in one day.  But ultimately it was my decision to the do the Shoot from the Hip project that I think was the best.  Not only did I get a chance to learn more about film, play 2 major characters in a movie, and have an absolute blast, but I also decided to take Magnet Classes as a result where I’ve met some amazing people and really grown as an improviser.

Best Personal Development – Tasting More
I’ve had the same general tastes in food for my whole life.  The practice to try more foods and drinks has led to some interesting revelations, wider variety in food options, and a few gross faces.  Say what you want about my eating habits, but at least I’m trying, right?

Best Travel – Milwaukee
2009 was another year of fun travel.  I went to Cincinnati (no surprise), Philadelphia, DC, Boston, Chicago, Milwaukee, Portland, and upstate New York.  Of all the trips, Milwaukee was my favorite as I was able to do non-stop improv at the ComedySportz tournament and meet some awesome, like-minded people.

Best Improv Show – BASH
I’ve seen a number of amazing shows this year, but the most impressive was definitely the one-man improvised musical starring Blaine Swen.  It was hilarious, heart-felt, and incredibly inspiring.

Best Improv Performance– Duo Show at The Creek
I was fortunate enough to perform a lot this past year.  Some shows went well, others not so much, but my favorite show I performed in this year was a duo show with Woodruff at The Creek.  I might have had funnier shows, but it was the most fun and showed I could rebound from one of my worst shows (which took place about an hour earlier).

Best Movie I Saw – Avatar
While it may not be the most original story, Avatar is a great example of original storytelling.  Fusing real life and CGI, the movie takes you to a new world that you feel apart of.  Definitely my favorite of 2009.

Best Book I Read – Story
I got through a number of good books this year (Outliers, In the Blink of an Eye, Sorrows of Young Werther to name a few), but my favorite was Story my Robert McKee.  It changed the way that I watch and understand movies and anything else with narrative structure.  It’s a fascinating perspective.

10 Things That Should Be True But Aren’t

Advice for People in Job Transition