In my 1,000th performance in my 50th state on my 32nd birthday, I shared the journey of what it was like to live as a nomad, why I did it, and what I learned from the experience.

A big shout-out to Civil Beat in Honolulu for letting me tell this story and for putting on an incredible storytelling event.

To learn more about the journey, check out my other travel posts. 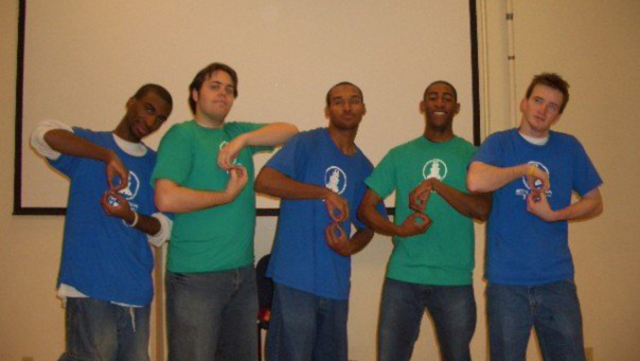 I stepped out into center stage, or as we call it, the middle of the playing field. The stage lights shined brightly in my face. The loyal fans eagerly awaited what I had to say.

The people were fellow managers of other CSz Teams from around the country. ComedySportz is produced by CSz Worldwide and can be found in 25 different cities in the United States and in the UK and in Germany.

The show is improv comedy played as a sport, where 2 teams go back and forth in game-based improv, where the fans help decide on a winning team. More so than any show that I’ve ever been a part of, ComedySportz is about celebrating the fans who come to see the show, making them the starts of the night as opposed to the performers on stage.

We were all in Richmond, VA for a Shareholders’ Meeting, where all of the managers from the individual cities get together once a year and talk about business strategies, city updates, and general tomfoolery. For the past few years, I had been taking an increased role in those meetings helping the lead branding committee and serve on the executive council.

This was a bittersweet meeting in Richmond because I was stepping away from a lot of those duties as part of this nomad adventure that I was going on.

Back on stage, the show continued on. Thus far it had been a blast, not a surprise when you’re playing with incredibly talented improvisers, many of whom have more than 20 years of improv experience.

The game I so loved was called Celebrity Punishment, a jump-out style game that includes making puns based off of celebrity names, much like Garth from Wayne’s World (“If she were a president, she would be Baberham Lincoln”). Like all ComedySportz games, Celebrity Punishment starts by getting a suggestion from the audience, for this game, the name of a celebrity.

I was stepping out to make a pun based off of the suggestion of Bruce Willis. I took a breath and then shared, “If Bruce Willis was a mediator, he’d be Truce Willis.” The audience mostly laughed.

I stepped back, while my fellow managers and players stepped in sharing their own jokes on Bruce.

I couldn’t help but marvel at the fun that ComedySportz is; it’s one of the funnest shows I’ve ever done and I’ve had the privilege of doing it since I joined CSz New York in 2008.

It’s also given me a ton of opportunity within the corporate world. I’ve helped lead a number of workshops at a number of different organizations in applied improvisation. Much of what I’ve learned in training and performance can be attributed to the people on the stage with me.

I bring my focus back to the match just as the suggestion changes. It’s now Britney Spears. A few managers share their lines before I step out and say, “if Britney Spears were more advanced she would be Britney Bow and Arrow.”

The audience groans in delight at the terrible joke. Admittedly, I take delight in a groan as much as a laugh. The suggestion changes to JFK.

I step forward, “If JFK had come a little bit later, he’d be GES.”

I’m definitely going to miss this.

One of my goals for 2011 was to perform at least 100 times. I was able to meet and surpass that goal, finishing with 119 total performances.

I just got back from the Shoot from the Hip project and had an amazing time.  Not only did I meet some great people and make a pretty solid movie, I learned a ton.

I learned more about filming in 10 days than I could have by reading 100 books.  Here are some of the bits of wisdom I picked up on making a film:

21 tips I picked up from watching a variety of performances this week:

1. Commitment is key. If you don’t believe it, the audience won’t believe it.
2. Always think about stage picture, always.
3. Acting is reacting–to your scene partner, environment, and circumstance.

10. It’s the job of the performers to tell the audience what they should be paying attention to.
11. When the audience can tell you are having fun on stage, they’ll have more fun.
12. Repetition (plus variation) and mirroring actions is fulfilling for the audience.

13. It is better to edit too soon than too late.
14. Be specific–it’s funnier.
15. Commit fully and do it immediately.

16. Make a choice. It doesn’t matter what choice, just make one.
17. Know your audience and know what they know.
18. You have to sell it. Hilarious lines are ruined by poor performance. Poor lines are improved by commitment and confidence.

19. A mistake is only a mistake on stage when it is called out as one.  Otherwise the audience thinks that it was supposed to happen.
20. Know the history of the character, even if it never is said or written.
21. Look for the deeper meaning in the words or actions.

From everything that I’ve read, been taught, learned and experienced when it comes to improv, they are concepts and ideas that come back time and time again.  And if you were to take those concepts, put them in a pot, and stir, you’d have an “ideal improviser” soup.

The ideal improviser doesn’t think about these things, he just does them.  (Of course until you reach that stage, you’ll probably have to think about them from time to time, even if it means getting in your head.  That’s what rehearsals are for).

Doesn’t Think – The motto of the Upright Citizen’s Brigade Theater is “Don’t Think.”  It’s true, the ideal improviser doesn’t think about The Rules, or even this list of things; he listens, builds on what’s been established, and plays.

Listens – No man is an island and no improviser can survive without his scene partners.  Listening is the key to building a completely improvised world.  After all, as Truth in Comedy tells us, “The only star in improv is the ensemble itself.”

Ignores the Rules – The entire premise of Mick Napier’s book Improvise is that you don’t need to even know the rules to have a great improv scene.  Asking questions, or saying no can work as long as you have commitment and agreement from your scene partners.  As Charna Halpern says in Truth in Comedy, “The only rule that can never be broken is the rule of agreement.”

Is Specific – Specificity is what adds spice to an improv scene and helps bridge the gap between what is real and what the audience sees as “real.”  As Tim Kazurinsky said, “The trick is to pretend that none of it is pretend.”  This comes in the form of being specific–in dialogue, references, character choices, object work, and stage picture.

Changes Things Up – Too much of the same can get boring, even if it started out great.  No one wants to do (or see) anything that is the same for 50 straight minutes, even laughing–they need a break.  The ideal improviser shows variety in character, emotion, status–everything.

Has Fun – Mick Napier is quoted in The Second City Almanac of Improvisation as saying “At the heart of improvisation is play.”  That’s why the ideal improviser gets onstage: to have fun.

The ideal improviser is just that, an ideal.  He doesn’t actually exist.  But following the guidelines above, distilled from the rules, non-rules, and generalities of various methodologies, you can get closer to that ideal improvisers.  And just like the chicken dance, my friends, that’s what it’s all about.