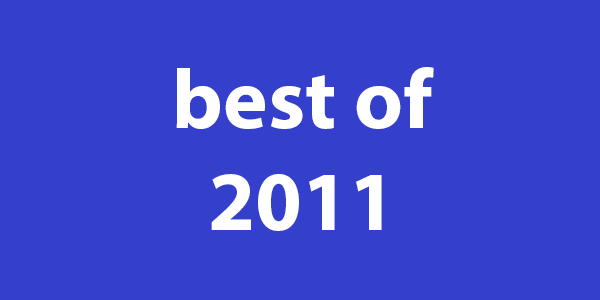 I think by now we all know that I give myself 10 goals every year. This year I had some great goals and accomplished many of them, but the biggest accomplishment was finally getting published. I now have a book written by me sitting on my bookshelf!  Hopefully it’s just the first of many books.

Part-way through 2010, I created something called the Daily 3 Challenge. In 2011, I formalized this into the concept of Quality and Perfect Days and it’s done a wonder to my daily productivity and long-term goals. By converting my long-term goals into daily ones, I was better able to track them and make adjustments as needed.

I’m not that forthcomingly vocal about my work with Humor That Works. It’s not that I’m not proud of it (I definitely am), I just don’t like to force it onto other people. But, in 2011 I’ve talked about my passion with a few different people and it’s lead to some opportunities for training and discussion.

One great example of that technically happened in late 2010 but had a huge impact on HTW: talking with the former adviser of The 8th Floor about what I was doing. As a result, she helped me secure a spot to train incoming RAs at Ohio State, a training that went incredibly well and has helped spur a number of other potential opportunities.

In recent years, I haven’t spent a lot of time dating, mostly do to other priorities. In 2011 I decided I wanted to get back out there more seriously. I didn’t want to date anyone I knew from either career (work or improv) so I decided to go online. At first I was on PlentyOfFish, but moved over to OK Cupid due to it’s better interface.

I had a few bad dates at first, but then met someone I liked a lot and have been with for 6 months now. It was a great decision to join the site and it’s been a fun ride with the GF since July.

While all of the travel has been enjoyable, the best of it was going to Cincinnati and Baton Rouge in one trip. Over the course of 5 days, I was in 3 different states doing 3 different HTW trainings. I enjoyed the process and gives me reason to believe that I would enjoy doing that more often throughout the year.

I didn’t have as many visitors this year in NYC, but I still had some great times. My favorite was when Keenan and Rob visited as it was great to catch up with them and also see TV on the Radio in Williamsburg Park.

I ate at a lot of new restaurants this year as part of my challenge to experience new places in NYC. My favorite of the year would have to be Pio Pio. The chicken is incredibly delicious and, for the amount of food you get, is at a good price.

But my favorite of the year would have to be the two-person show Nate was in in Chicago. It was slow paced, very patient and not much happened… and yet it was engaging the whole way through and hilarious.

With 100+ performances in 2011, it’s hard to pick just one that I enjoyed. I’ve had some phenomenal shows with Mint Condition and Grappler, as well as some of my class teams. CSz has also had some great shows, including some at home, on the road and at tournament.

My favorite show of the year though would have to go to the 2-person show I did at P&G. Not only was it more challenging because there were only 2 of us, but it was also in front of people I work with, so the stakes were high. We had a great show and I impressed a lot of people.

Best Movie I Saw – Scott Pilgrim vs the World

I’m still not a big movie goer, but I did see all of the 2010 Best Picture Nominees (Toy Story 3, True Grit, The Fighter, The 127 Hours, Kids Are All Right, Winter’s Bone, Black Swan, Inception, The Social Network, King’s Speech) as part of a 24-hour marathon earlier in the year, as well as a few other movies (Mission Impossible 3, Hugo, Apocalypse Now, Scott Pilgrim vs the World).

My favorite new movie from the year was Scott Pilgrim vs the World. It wasn’t incredible, but it was a lot of fun and very entertaining.

I read a few good books this year (4-Hour Body, Laffirmations, Habibi) but my favorite of the year was Last Words by George Carlin. It was a great look back at his life and how he came to be famous as a stand-up comedian.

My favorite tweet of the year is a bit silly, but I like it. Here are the other picks:

Mirror mirror, on the wall. Dresser dresser, on the floor. Light light, on the ceiling. Room room, checklist complete.